Only a few slug species are pests. Most are critical members of land and water ecosystems all around the world.
Brown/Black/Red Slugs are creepies that no one enjoys dealing with.  Even when you think they’re not on your property or in your garden — rest assured they are.
They’re part of the system set up to break down decaying matter. And I for one wish they would stick to that rather than getting on my lettuce and other crops they consider gourmet fare. I’ve never met a gardener who had a kind word to say about them, but slugs are important as scavengers and recyclers.
You’ll be glad to know that out all the slugs existing on your property you’ll see no more than 10% of the population because the other 90% are busy underground doing their job. (At least that’s what scientist who study slugs say.)
1. Know your enemy
There are many different kinds of slugs and some are more harmful than others. The large black slug doesn’t do much damage at all as they prefer rotting matter, dung and carrion over living plants. The garden slug is the opposite, attacking anything that even slightly resembles an herbaceous plant. 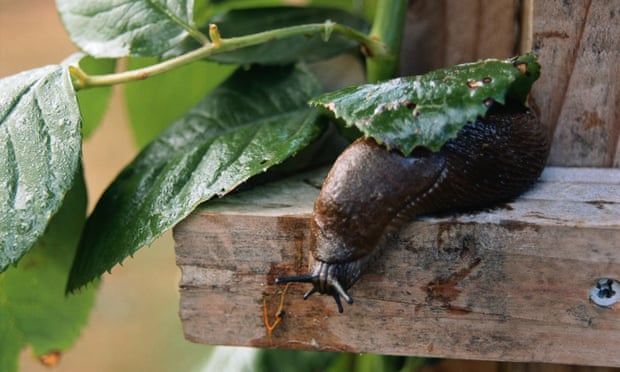 Ducks: Experts recommend Khaki Campbells or Indian Runners who are the best carnivores – other breeds might eat more of your vegetables. A good permaculture solution would be to have your garden in between the duck hut and the pen, thereby allowing the ducks a good munch in the morning and evening while on the way to and from home.
3. Control by death or relocation
I kill them without mercy, but as humanely as possible. The most effective way of finding them is to go out with a torch just after dusk or on a miserable grey wet day. Make sure to look on the underside of the vegetable leaves and let the plant damage and slime trails guide you.

Hand-picking. Hand-picking can be very effective if done thoroughly on a regular basis. At first you should look for snails and slugs daily, paying careful attention to potential hiding places. After the population has noticeably declined, weekly hand-picking can be sufficient.

Jars: Drown slugs by putting them in a jar filled completely with water and keeping the lid screwed on tightly. A bucket with water is not good enough, the slugs will just crawl out again.

Sharp knife: My preferred method at the moment is a sharp knife. I use it flick the slugs of the plant onto the soil surface and behead the poor things. I think it is the quickest death, and the most convenient.

Beer traps: After trying several designs this is the winner. The slugs are attracted by the fermentation gasses of beer. Any cheap lager or homebrew is good, though ales and Guinness are best. Place the traps at the edge of the beds. If you place them in the middle, slugs might get distracted by your juicy vegetables on the way to the pub.
Other traps: Grapefruit halves, flower pots, cardboard, or anything dark and moist will be favored by the slugs as a hiding place during the day. Inspect and capture at your leisure. 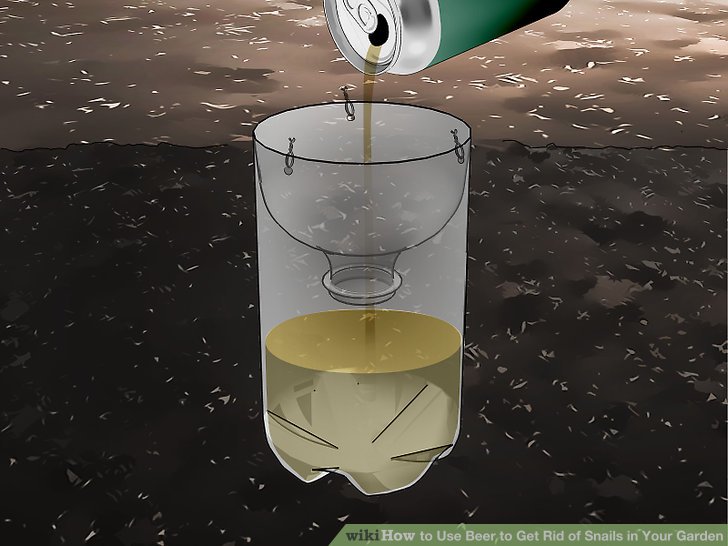 4. Border control
Copper: Slugs don’t like to crawl over copper. A dozen or so pennies stuck into the soil around a seedling can form a border – a stripped electrical cable is even better. Cut the top and the bottom of a plastic bottle. Wrap the stripped cable a few times around it with one or two loops in it, fasten it to the bottle with duct tape through the loops and flatten the copper loops to the plastic. Dig the plastic into the soil so that slugs don’t crawl underneath. If you use sticks to support the plant, wrap copper around the sticks too. Make sure none of the leaves touch the ground or any weeds touch the plant. Slugs can’t fly but they know how to find shortcuts.

Seaweed
If you have access to seaweed, it’s well worth the effort to gather some.  Seaweed is not only a good soil amendment for the garden, it’s a natural repellent for slugs.  Mulch with seaweed around the base of plants or perimeter of the garden bed.  Pile it on 3″ to 4″ thick — when it dries it will shrink to just an inch or so deep.  Seaweed is salty and slugs avoid salt.  Push the seaweed away from plant stems so it’s not in direct contact.  During hot weather, seaweed will dry and become very rough which also deters the slugs.

Bran
Wheat or corn bran is a desiccant that will cause slugs to swell up and die when consumed.  Sprinkle it around plants in your vegetable and flower beds and monitor to see if slugs are snacking.  If your brand seems too coarse for slugs to eat, blend it in your food processor until a finer grain.  Like many other soil treatments, bran needs to be reapplied after a heavy rain, but the beauty of this treatment?  It’s inexpensive and non-toxic to humans.  You can also purchase bran in bulk at local feed stores.

A promising mulching agent is untreated sheep’s wool.
Wool showed that it successfully deters slugs and snails, at least until the rain comes.  So, the wool could be put to good use in a greenhouse or a cold frame.
Diatomaceous Earth (DE)
Diatomaceous Earth (DE) is made from tiny fossilized water plants and is all natural.  When slugs crawl through DE it adheres.  The tiny particles with their microscopic razor sharp edges are absorbed and eventually can kill the slug. DE doesn’t kill instantly.  It is most effective when used in dry conditions.  It has little effect when it absorbs moisture, so you’ll have to reapply after rain. 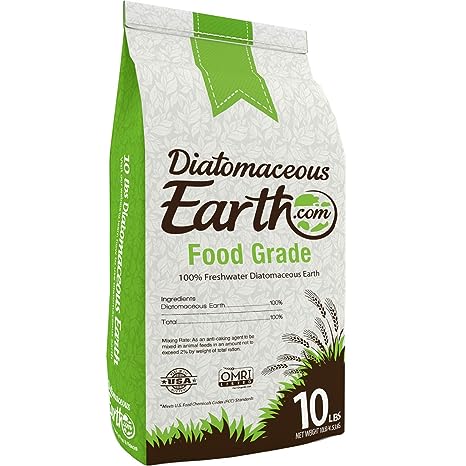 Egg shells: The sharp edges of eggshells help as a deterrent, but only when they are clean and dry. When peeling an egg, try to remove the inner membrane and rinse if needed. Be aware that rain quickly makes the eggshells lose their effectiveness.
Do not try:
Salt: Pouring salt around your veg will keep the slugs away indeed, but unless your plants like maritime conditions they will die too!

Seashells: The sharp edges deter slugs from crossing, but they don’t decay like eggshells and can be a serious nuisance when weeding for many years to come.
Slug pellets: Most are not organic and will kill the predators too. Even the organic ones are not wise to use: when the slugs die, the predators leave to find food elsewhere – leaving you dependent on the pellets.