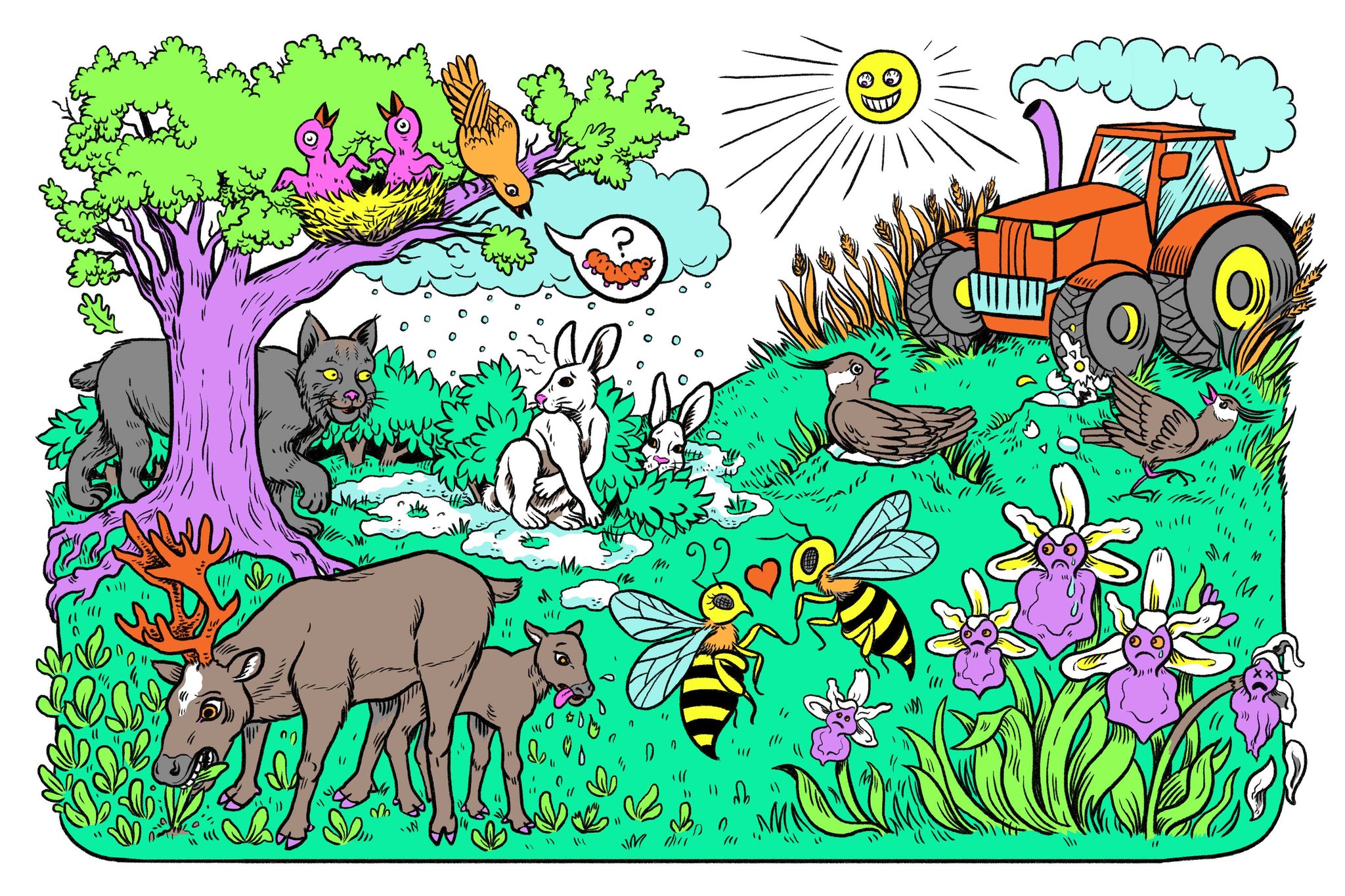 Every year, as the seasons change, a complex ballet unfolds around the world. Trees in the Northern Hemisphere leaf out in the spring as frost recedes. Caterpillars hatch to gorge on leaves. Bees and butterflies emerge to pollinate flowers. Birds leave the Southern Hemisphere and fly thousands of miles to lay eggs and feast on insects in the north.

All of these species stay in sync with each other by relying on environmental cues, much as ballet dancers move to orchestral music.

But global warming is changing the music, with spring now arriving several weeks earlier in parts of the world than it did a few decades ago. Not all species are adjusting to this warming at the same rate, and, as a result, some are falling out of step.

Scientists who study the changes in plants and animals triggered by seasons have a term for this: phenological mismatch. And they’re still trying to understand exactly how such mismatches — like the blooming of a flower before its pollinator emerges — might affect ecosystems.

In some cases, species might simply adapt by shifting their ranges, or eating different foods. But if species can’t adapt quickly enough, these mismatches could have “significant negative impacts,” said Madeleine Rubenstein, a biologist at the United States Geological Survey’s National Climate Change and Wildlife Science Center.

“If you look at the past history of climate on earth, there has never been such a dramatic, rapid, change in the climate,” said Andrea Santangeli, a postdoctoral researcher at the Finnish Museum of Natural History. “Species have to respond really fast,” he said, “that’s really unprecedented.”

Here are five examples of mismatch, just one of the many threats that species face from global warming, that scientists have discovered so far:

The early spider orchid relies on deception to reproduce. Each spring, the orchid, whose bulbous crimson body looks like an insect, releases a pheromone that tricks solitary male bees into thinking the plant is a mating partner — a key step for pollination.

This ruse, which scientists call pseudocopulation, works because the orchid tends to bloom during a specific window each spring — shortly after lonely male bees emerge from hibernation but before female bees appear.

Yet with spring coming earlier, female bees are now emerging sooner and luring the male bees away from the lovelorn orchid, according to a 2014 study from Britain.

By examining data collected in herbariums and in the field over a century, the researchers found that the gap between the times when male bees and female bees emerge shrinks by about 6.6 days for each degree Celsius of warming, giving the orchid less opportunity to reproduce.

“The main finding is that things are getting increasingly bad for orchid pollination,” said Anthony Davy, a professor of biological science at the University of East Anglia, and the lead author of the paper. For this orchid — which is already rare — the future looks bleak, he said.

The European pied flycatcher runs on a tight schedule each spring.

From its wintering grounds in Africa, the bird flies thousands of miles north to Europe to lay eggs in time for the emergence of winter moth caterpillars, which appear for a few weeks each spring to munch on young oak leaves.

By timing this just right, the flycatchers ensure there’s enough food around when their hungry chicks hatch. In a series of studies in the 2000s, however, scientists in the Netherlands showed that many flycatchers were starting to miss this narrow window.

As spring temperatures warmed, oak trees were leafing out earlier and peak caterpillar season was arriving up to two weeks sooner in some places. But many flycatchers, which appear to schedule their departure from Africa based on the length of day there, were not getting to Europe early enough for their spring meals.

In the parts of the Netherlands where peak caterpillar season had advanced the fastest, the scientists later found, flycatcher populations dwindled sharply. “That was the big discovery that suggested this mismatch could have real consequences for populations,” said Christiaan Both, an ecologist at the University of Groningen.

Birds and tractors get too close for comfort

Climate change doesn’t just cause missed connections. In some cases, the advance of warmer weather can lead to perilous meetings.

In Finland, for example, the Northern lapwing and Eurasian curlew have usually built their ground nests on barley fields after farmers have sown their crops in the spring. But as temperatures have risen, the birds are now increasingly laying their eggs before the farmers get to the fields, which means their well-concealed nests are more likely to get destroyed by tractors and other machinery.

Looking at 38 years of data, researchers found that farmers in Finland are now sowing their fields a week earlier in response to warmer temperatures, but the birds are laying their eggs  two to three weeks earlier. “This has created a phenological mismatch,” said Mr. Santangeli, the lead author of the study. “The response we’ll see is declines of these birds.”

Caribou show up late for lunch

Caribou in western Greenland follow a strict seasonal diet. In the winter, they eat lichen along the coast. In the spring and summer, they venture inland to give birth to their calves and eat the Arctic plants that grow there.

As Greenland has warmed up and sea ice has declined, however, those inland Arctic plants have been emerging earlier — with some plant species now greening 26 days earlier than they did a decade ago. But the caribou have not shifted their migration as quickly. And scientists have documented a troubling trend in the region: More caribou calves appear to be dying early in years when the spring plant growth preceded the caribou’s calving season.

While that study only found a correlation between warmer temperatures and caribou calf deaths, “it’s consistent with the idea that mismatch is disadvantageous,” said Eric Post, an ecology professor at the University of California, Davis. When Arctic plants green up earlier, they may become tougher and less nutritious by the time the caribou get there and start eating them.

Why don’t the caribou speed up their migration? One possibility is that their reproductive cycles respond most strongly to seasonal signals like the length of the day, whereas plants respond more strongly to local temperatures, which are rising.

In theory, if given enough time, the caribou might eventually adjust as natural selection takes its course and favors individuals that calve earlier. But with the Arctic warming faster than the rest of the globe, Dr. Post said, “the question is whether things are changing too fast for evolution to matter.”

The snowshoe hare has a wardrobe malfunction

Climate change doesn’t just cause mismatches in the spring. Consider the snowshoe hare, whose fur coat has evolved to change from brown to white during the winter for camouflage. As the earth has warmed, however, snow cover in the hare’s habitat melts sooner, leaving the animal more exposed to predators.

“Camouflage is critical to keep prey animals alive,” said L. Scott Mills, a professor of wildlife biology at the University of Montana who studies the impacts of camouflage mismatch on species like the snowshoe hare.

For every week the hare is mismatched, Dr. Mills and his colleagues found, it had a 7 percent higher chance of being killed by predators like the lynx.

Currently, the hare is only mismatched by a week or two. But by midcentury, Dr. Mills said, that could extend up to eight weeks. If that were to happen, he said, the hare “would start declining toward extinction.”

There is some good news for the snowshoe hare, however. Where evolution was previously thought to take millions of years, scientists now think an animal like the hare could adapt in five to 10 generations, especially if those parts of the hare population which are more adaptable are protected.

“It does give us an avenue for hope,” Dr. Mills said. “It’s not a foregone conclusion that species with phenological mismatch are going to go extinct.”

Phenology In the Garden
Nature’s “signs” are different in every region; however, you should still relate to these examples: